Oscar Baccilieri was born in 1965 in Reggio Emilia, where his working and exhibiting space Studioquartopiano is based.

The encounter with art takes place during his studies, and this commitment continues at the G. Chierici State Art Institute in Reggio Emilia, and then at the Academy of Fine Arts in Bologna, where in 1991 he graduates in Painting with Concetto Pozzati.

The avant-gardes and the new linguistic trends impact decisively on the development of his own consistent language, most notably Pop Art and David Hockney, followed by Picasso, Mirò and Matisse.

Since 1986, swimming pools and trampolines, tennis courts and balls have been favorite subjects, symbols of a fictitious affluence engendered by a “solar” consumerism, or, vice versa, a Pop that depicts a widespread, apparently positive lifestyle.

His first solo exhibition, Trame e Orditi in 1992 at Palazzo Bentivoglio in Reggio Emilia, presents large raw canvases, worked with mixed techniques (earths, tempera, watercolors) and mostly toned in yellows, reds and blues. These already show an attempt to breach into space by shortening first perceptive, then physical distance between the painting and the observer. Images, in fact, appear fragmented into different perspectival planes combining distinct levels of depth.  The observer becomes immersed in a new spatiality, built on the aesthetic and formal balance of the compositional elements (full, empty, colors, signs), according to an intuitive mix of calculated rhythm and natural harmony, balanced between chance and project. The dimension of meditative serenity that emerges is a mental space in which the visitor lingers, an expansion of space-time where to deepen one’s thoughts.

Meanwhile, this notable conceptual interest, joined with a growing curiosity for unconventional materials, merges into the endeavor of the Mistiche Nutelle group, “the mystic of art rejoining the need to become children again”.

Founded in Bologna in 1990 with artists Vittorio Broccadello, Mauro Luccarini, Adriano Tetti, the group works with heterogeneous materials and mixed techniques as play, wittily removing sense from all the works’ titles, by means of the exasperated insertion of verbo- visual elements from mass, industrial and traditional culture, joking with concealed meanings, puzzles, double-entenders and other rhetorical figures.

Until 1998, Oscar Baccilieri exhibits with the Mistiche Nutelle, devoting himself with great vivacity to combine elements from diverse sensory spheres in sculptures and installations made with the most common and disparate objet trouvée, contributing to what the semiologist Omar Calabrese, explicitly referring to the group’s activity, defined “apartment art” as a form of “new and accessible mass products”.

During these years, his personal research continues ceaselessly.

Alongside traditional themes (water, swimming pools, tennis) he develops an interest towards materic relief, that translates into the application of ever new materials on canvases, from marble dust to cashmere, as in the exhibition titled Il filo del piacere in 1993, in which Baccilieri gets the opportunity to show with artists Antonia Ciampi, Rinaldo Novali, Concepts Pozzati and Ketty Tagliatti.

The artist tests pictorial effects and three-dimensionality on the flat surface, edging away from the canvas and testing different supports, in particular raw materials traditionally employed in sculpture, with the consistent intention of going against conventions, academic and not.

In 1994, he produces a series of travertine tablets, on which he traces a multitude of free signs, stains, sketches of vegetation and subjects with a clearly evocative narrative intent, challenging through imagination the hardness and coldness of the stone in his customary color palette, in this case using watercolors.

Regaining the innocence and freshness with which children discover the world that was already underway while working with the Mistiche Nutelle, also affects his figurative repertoire, that over the years enriches with ever increasingly explicit references: flowers, isolated toys and animals compose fairy tales’ bestiaries superimposed on floral backgrounds and childhood visions that mingle personal and collective memory.

Later he also experiments using beeswax, a warm and vital element, almost sacral, on impenetrable supports, such as marble and iron.

In 2000, he encounters copper whose ductility invites him to deepen a temporal dimension with the sequential, spontaneous surfacing of designs and ramifications, that occur during the process of the acidification of the surface, layer by layer. Initially, he proceeds by masking decorative textures and imaginative subjects. In these works, presented in the Ramilandia exhibition in 2005 at Castello del Vescovo in Arceto (RE), the materiality of copper and a childish imagination converge in composing the substance of dreams, contaminated with disenchanted reality. It is as if the artist relished in staging a personal intellectual revenge with small disturbing details implanted in the story, between emerald green and blood red, action and reaction between acid and copper, corrosion and narrative matter.

On these premises, he establishes an intense relationship between a sacred and profane dimension, between purity and the reality of life.

Over a few years elements from memories of daily life surface from corroded matter, replacing puppets with everyday objects (since 2009): chairs, hats, bags, vases … alienated subjects, suspended between the load of experience and the lightheartedness they typify, progressively shedding their weight and consistency.

At first, they mutate in colored signs (red and white pigments) and accidental material traces (proliferation of copper and beeswax) emerging from increasingly lighter backgrounds as solids being designed in the series Rosso / Bianco / Bianco e rosso on copper (all 2016-2018), also rendered in Studi su carta assorbente (2018) where the same design intention translates on a traditionally welcoming support.

Then the same objects, de-structured and blurred into the background, almost fully disappear in the parallel series of the Raschiamenti (also 2016-2018), a genuine act of reformation aimed at clearing the load of memory to create a clean slate and start designing anew.

What the artist intended as an investigation into matter, into perceptual and physical spatiality, now becomes an excavation into the depths of the unconscious, that becomes interior landscape again in the Landscape series (2017). Here he intervenes on the copper’s very structure that becomes bent and crumpled, projecting lightly towards the viewer, to embroil her/him into a vision. With Landscape Confection (2020) the visual horizon is both closed and open: each confection keeps its own individuality and at the same time composes the entire imagination of Oscar Baccilieri on the line of infinity.

First, he carves it by hand, using the ancient Chinese cut-paper technique. The latter is revitalized within the project In a twitter which refers at once to the chirping social network that keeps us glued to the news, and to the birds presented in a fantastic garden, dense with vegetation. The layers of paper on wood and canvases, combined with the sandpaper’s texture, make up the pictorial effect and the three-dimensionality of the collage.

Later, as in the production on copper, the fairytale element fades, giving way to the disenchantment of the Deposizioni (2017-2018), the fictitious gardens in which wood and sandpaper scraps, remnants of materials accumulated in recent years, are like fragments of the past, stashed and abandoned in a hazy undergrowth of splintered and amassed memories in which the original figures are no longer recognizable. The recovery and recycling of waste creates a series of suggestive still-lives, small corners of imagination imbued with nostalgia for memories denied, like sacred relics.

In 2018 the artist touches on a peak of sacredness with the Madonna del Parto, a site-specific piece featuring in the solo exhibition Nemo profeta in patria, in the castle of San Martino in Rio (RE). Superimposing sandpaper stamps, he reproduces the Virgin’s abdomen as in the homonymous masterpiece by Piero Della Francesca (1570 ca.), singling out the part that generates life, magnified on a large tapestry that spills over the floor.

Also in Point (2018), Land (2019) and Innatura (2020) the sandpaper stamp gains a perceptive value in constructing the image which is at times inspired by 1900s Masters in an attempt to merge genres (figurative and abstract) or by nature, taking as a reference landscape memory itself.

Parallel to the two-dimensional production, the artist conducts a sculptural practice based on the ready-made, in line with the playful installations of the Mistiche Nutelle. Initially more restrained in using copper in the series Le palle di Mozart (2005-2018), increasingly he breaks free, gradually including all the materials and techniques explored in the past with a renewed plastic sense, making them converge in a conscious and unified manner into new objects.

From 2016 he devotes himself to recover found objects at flea markets or in landfills, such as old tools, containers, furnishings, reassembling them in fresh ways, based on personal memories.

In particular, in 2017 he creates with barbed wire from the Second World War a series of artworks that drawing from the drama of war focus on the pain and daily difficulties associated with childhood memories.

The Sudari and il Vaso di Pandora (both 2018) are also autobiographical, made by recycling the materials used in his own artistic practice.

In the first case, he transforms sheets used for the acidification of copper from 2010 to today, into a Shroud that imbues with sacredness the artist’s work, while continuing the process of corrosion and slow consumption. In the second, sandpaper scraps give form to an upward explosion of liberated scraps, ready to take on a new life.

The first of his Performance Non Autorizzate dates from 2018. The artist documents, with videos and photographs, a “clandestine” show in prestigious exhibiting spaces, temporarily hanging some of his small sandpaper works on the external walls. This is how he gets – quoting Andy Warhol – his 15 minutes of glory. 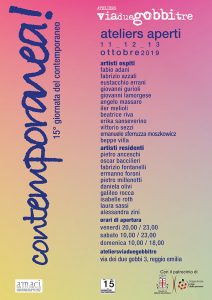 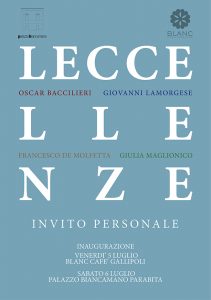 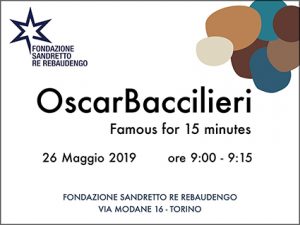 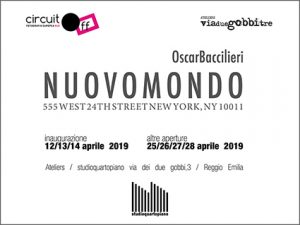 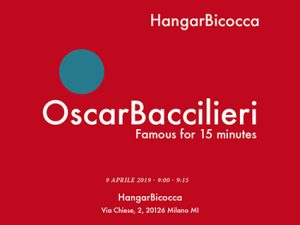 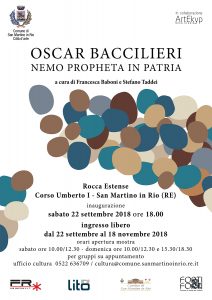 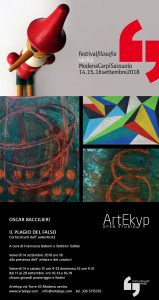 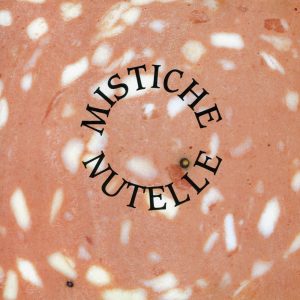 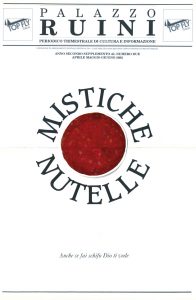 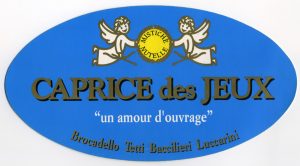 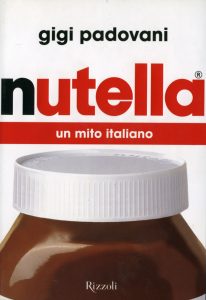 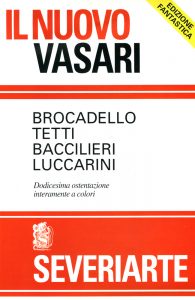 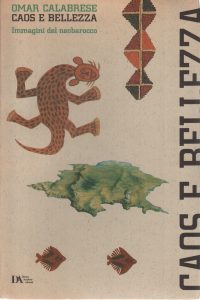